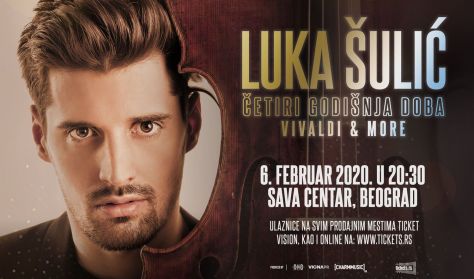 Luka Šulić is one of the most loved and appreciated musicians on the international scene for the virtuosity and passion he transmits at each performance.  more

Tickets on sale starting at 12h on September 24th online at www.tickets.rs

and at the Ticket Vision box offices.

Luka Šulić is one of the most loved and appreciated musicians on the international scene for the virtuosity and passion he transmits at each performance. After seven years of touring the world as part of the critically acclaimed duo 2CELLOS, Luka Šulić returns to his classical roots with his first solo album for Sony Classical and a new live project touring across the world, infact he will be the first musician in history to play "The Four Seasons" by Vivaldi for solo cello.

The concert will be held in Sava Center, Belgrade on the February 6th 2020. with starting time at 20:30, together with the Orchestra. Tickets for the concert will be on sale starting at 12h on September 24th online at www.tickets.rs and at Ticket Vision box offices.

The superstar cellist Luka Šulić takes on one of the most iconic works in classical music for his first independent recording project. Available everywhere Friday, October 25, his dramatic interpretation of Vivaldi’s The Four Seasons is the first complete recording of the popular cycle of Baroque concertos arranged for a cello soloist.  Also arriving today is the album’s lead offering, “La Primavera (Spring) Op. 8 No. 1 in D major – I. Allegro,” released alongside an accompanying video of Šulić performing the track from his world live Premiere – watch here.

“I’ve loved Vivaldi’s Four Seasons since I was a child,” says Luka Šulić of his newest project, adding, “I’ve always wanted to play the piece on the cello and love taking on new challenges.”

Even in a Baroque masterpiece, Luka Šulić is ready to defy expectations and shatter boundaries. Though hundreds of traditional recordings exist of The Four Seasons with a violin soloist, Luka Šulić’s recording will be the first complete version – his own painstaking work – that reimagines all four concertos of The Four Seasons for a cello soloist.

“Four Seasons is a very demanding piece for violin, let alone cello, so it was a long and difficult process for me,” says Luka Šulić.  “I spent two years preparing the arrangement, little by little, piece by piece.  In the end, I hope listeners will feel the same excitement I did while making this album and bringing Vivaldi’s iconic work to the cello for the first time.”

Born on 25th August 1987 in Maribor, Slovenia, into a family of musicians, Luka began his musical education at the age of five together with his father, a cellist himself, who was his first teacher. He enrolled at the Zagreb Music Academy to refine his technique and then he continued his studies first in Vienna and later at the prestigious Royal Academy of Music in London. Everywhere appreciated for his technique and his virtuosity, Luka soon became one of the most popular young classical musicians playing concerts in the most important classical theaters around the world as soloist, for chamber music and in contemporary compositions, accompanied by renowned orchestras all over the world (Warsaw Philharmonic, Deutsche Radio Philarmonie, Austrialian Chamber Orchestra, Russian Symphony Orchestra and many others). In 2009 he won the cello special prize at the International Lutoslawski Competition in Warsaw and in 2011 he performed at the Wigmore Hall in London winning the Royal Academy of Music award. In 2011, together with his friend and colleague Stjepan Hauser, he founded the 2Cellos that quickly became the new planetary phenomenon of crossover, thanks to sensational reinterpretations and rearrangements of famous rock and pop songs.

After performing in recent years in the main arenas of the world (from the Royal Albert Hall in London to the Arena in Verona, from the Sydney Opera House to the Radio City Music Hall in New York and many others), Luka has decided to start, besides the 2Cellos project, a new solo project dedicated to one of the most suggestive pages in the history of classical music, "The Four Seasons" by Antonio Vivaldi, a masterpiece he has always loved since he was a child and has been meticulously preparing for over 2 years in the original integral version for solo cello and orchestra.

THE FOUR SEASONS BY VIVALDI - LIVE

Tickets on sale starting at 12h on September 24th online at www.tickets.rs and at Ticket Vision selling points.